IN THE KITCHEN Lorenzo and Emily Tenreiro are in love — with each other, with their adopted hometown of Melrose, where they’re raising four children, and with introducing Latin American-influenced menus to the region.

And now, Spanish. T’ahpas 529 is their third popular spot in the Victorian city; it joins Coffee, Tea & Me, a cafe on Main Street, and La Qchara, a small, casual cafe near the commuter rail and right across from T’ahpas 529 on Franklin Street.

For executive chef Lorenzo, the grand opening of T’ahpas 529 on Jan. 13 was a dream come true. “I created the menu 12 years ago,” said the Venezuela native. Or even earlier.

A 15-year old Lorenzo fell in love with Spanish culture and food when his parents took the family on a monthlong trip through Spain, enjoying the sites and cuisine. Even a simple meal, a roadside picnic of ham and Manchego cheese, was an adventure. “I remember bulls on the highway, everywhere,” Lorenzo said.

THE LOCALE Once a hardware store, T’ahpas 529 appears more like a restaurant you’d find in the South End. Outside, a canary yellow awning stretches overhead. Inside, a red brick wall runs the length of the 77-seat restaurant, which is open for dinner only. Victorian tin tile runs along the top of the brick wall, a nod to its past. A wall of reclaimed white oak and a mirror at the bar reflect a wide selection of Spanish wines, sherries (jerez), and 12 taps of locally brewed beers (along with bottles and cans). A three-gallon dispenser storing Emily’s secret sangria recipe requires constant refilling.

Reminders of that distant family trip are present: Painted on the far wall is a black silhouette of a bull. On another wall, the Spanish flag is represented with three bold, horizontal stripes: two red stripes sandwiching a yellow one. 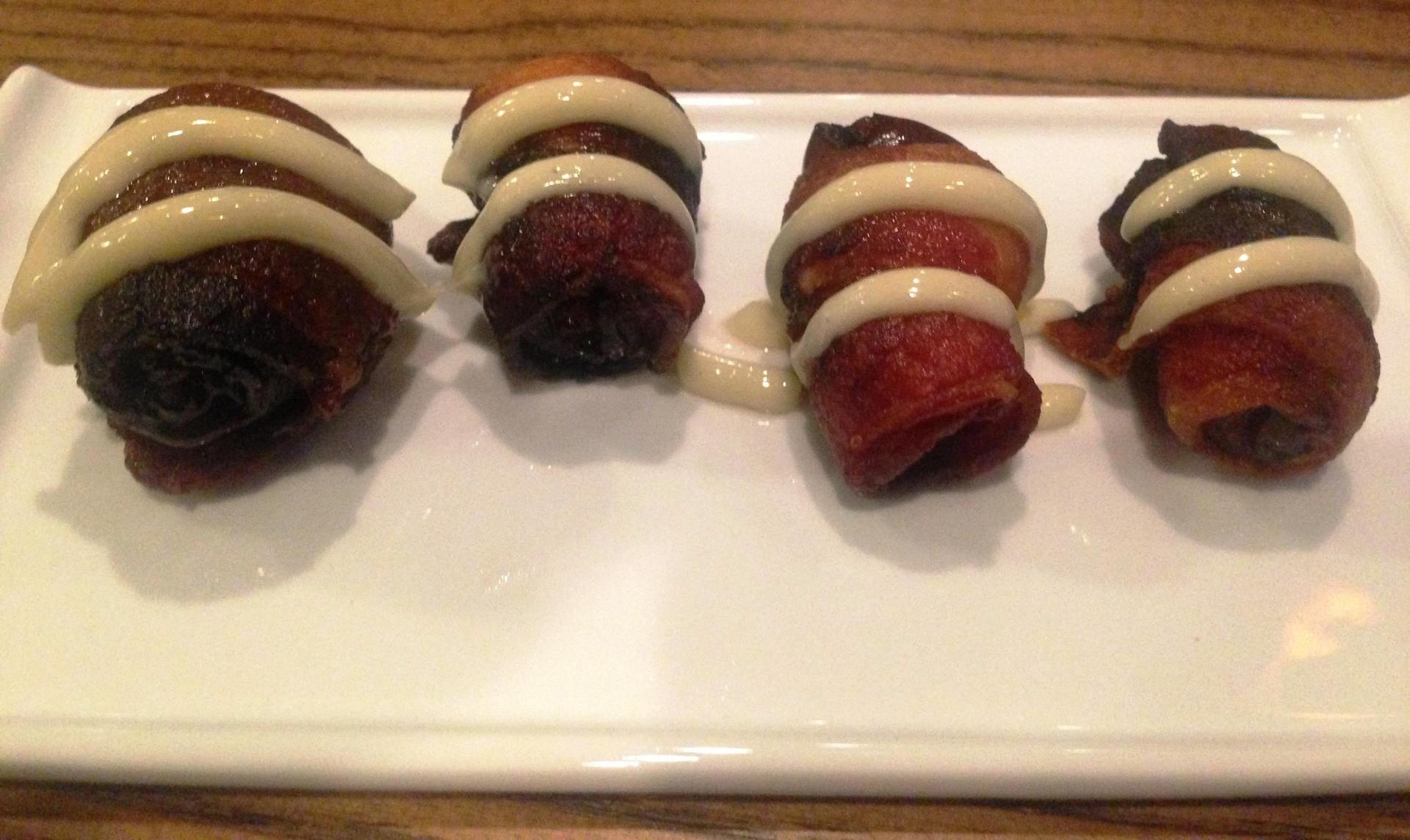 ON THE MENU As Spanish music beats overhead, it’s hard to know: Should we eat or dance?

We were new to the tapas experience, but Tina, our server, guided us. Figure two to three plates per person (hot or cold, sweet or savory), along with one paella.

Oscar Datiles ($6) was a perfect start. Crisp, salty bacon wrapped around four dates, each stuffed with Marcona almonds, then drizzled with cabrales crema, stopped us in our tracks with the sweet-crunchy-salty mix. Pinto de Pollo ($7) was another pleaser, with skewers of grilled marinated chicken that was moist, also topped with Cabrales crema.

We were getting full, but the preppy-looking plate of ceviche ($12) was a light dish. Pink, chopped-up ahi tuna was lined atop a bed of coconut-lime mojo (sauce) and pickled jalapeños, sprinkled with sesame seeds and olive oil.

For a plato principal (main course), the bacalao a la Vizcaina ($27) had tender, pan-seared cod in a sauce of sautéed pimientos and onions and sides of roasted patatas and sautéed spinach. The greens were sauteed with a confetti of chopped cashews and a dried fruit combination (apples, raisins, cherries, and apricots) that could be a tapas itself, we enjoyed it so much.

We experienced squid ink in the paella negra ($30), the pearl-white, short-grained bomba rice dish. It was topped with slivers of red pepper, a dollop of garlic aioli, and bits of cod and calamari throughout, all blackened by the ink. 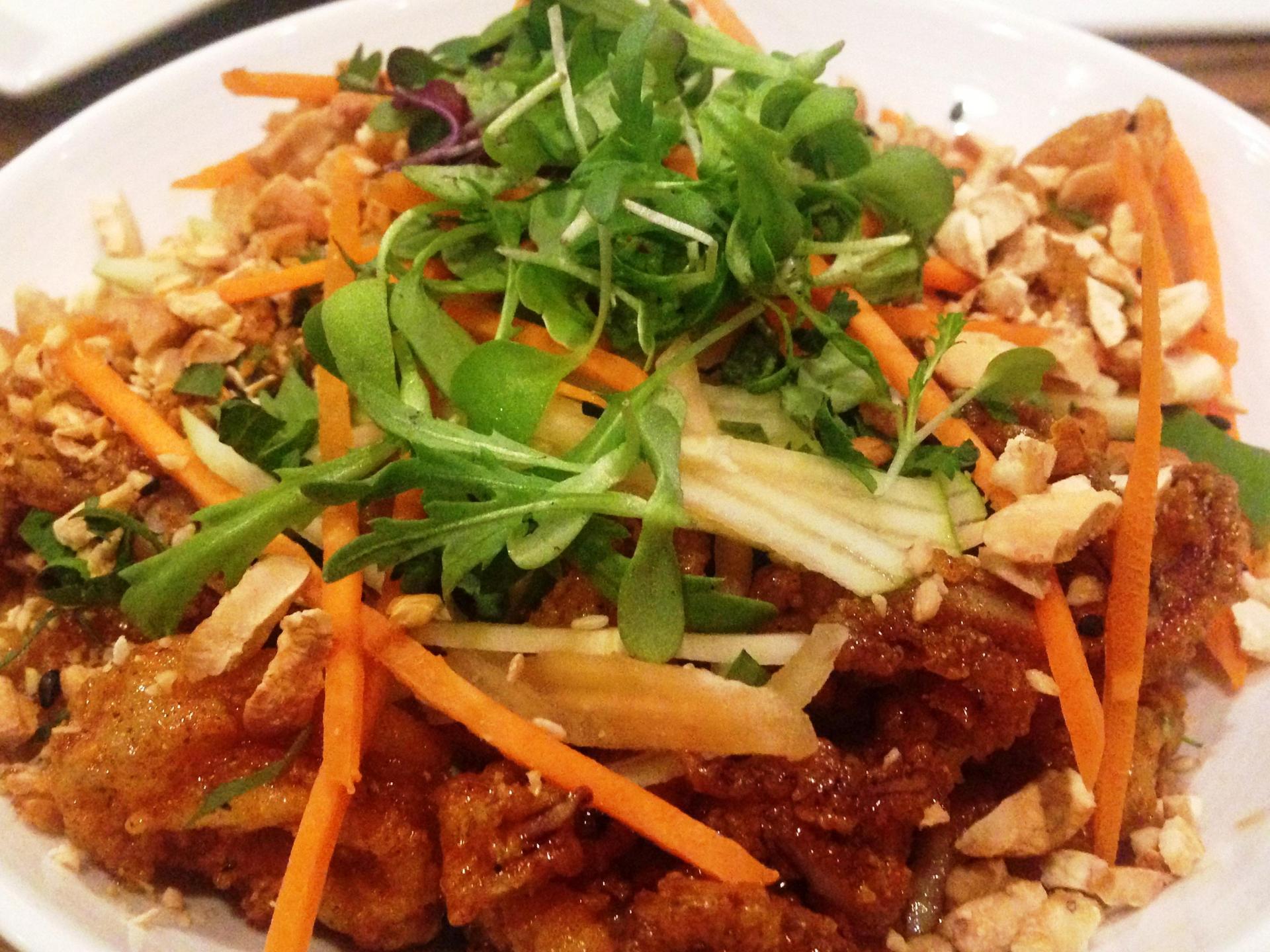 The crispy calamari is sweetened with panela honey atop a jumble of sprouts, cashews, carrots, and sesame sprinkles.